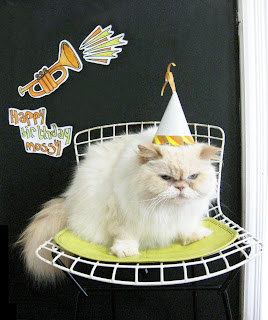 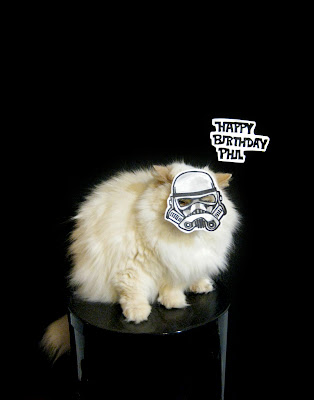 what do you get for your friends who don't need more ornamental crap in their lives?  (ornamental crap is my default gift for friends.)  personalized cat birthday message.  poof is the only cat in this household who is willing to sit relatively still & wear a hat, mask, costume etc.  well, i mean it doesn't make her happy, but she does it anyway.  good poofy.  looking forward to make some more. 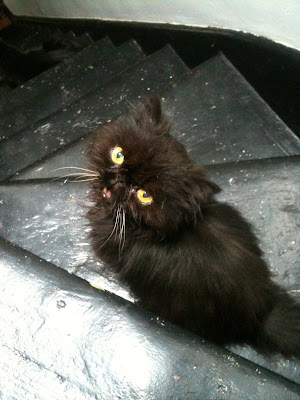 i've had pepito since 2003, i picked him up at the spca the day after i moved to montreal.  i went to winners to buy sheets for my the gross temporary bed that came with my studio apartment above a starbucks on st. denis street and then i found out how to get to the spca and ended up with the oldest oddest looking cat in the place, it was love at first sight.  he was an old stray cat when i got him so they didn't know exactly how old he was, he was so old that they kept asking me if maybe i didn't want one of younger cats.  no way!  i took him out of his cage and into the visiting room to try him out, and he just purred his face off.  sold!!

nine years later he's pretty sick with kidney failure.  it's sad but he's about 150 years old so it's not at all unexpected.  he's not really himself anymore and seems pretty cranky most of the time, and he's really not enjoying getting pilled every day & getting sub-Q fluids every other day.  i have to put him down soon so right now i'm just trying to spoil him with unlimited gravy and treats and attention and keeping him as comfortable as i can.  soooo, what does one do with a dead pet?

unfortunately it's not legal for me to bury him in my backyard in montreal.  and really, the last thing i need is for a pack of raccoons to dig him up and leave one of pepito's giant lovely eyeballs in my rose garden.  i looked into local pet crematoriums, but i just didn't like them,  the websites were tacky and cheesy. one place was like an industrial animal cremation factory.  other places offered dead pet paw footprint in clay, ugly ass urns and dumb ceremonies.  no thanks!  i also looked into taking another ceramics course so i could make my own tasteful urn.  there's only one place lets you watch, and i think it's only via webcam, and there's a weird extra fee for doing so.  and if think that's weird, you can have other people sign in and watch the live feed of your animal on a conveyer belt going into a oven as well.  also, cremations aren't eco friendly, it takes a lot of energy to fire up that oven and keep it that hot.  the mass cremations kind of creep me out, and one sad tiny cat being cremated alone also doesn't sit right with me.  i don't want to bury him at some random pet cemetery outside the city where the land may or may not be sold at one point.

i considered taxidermy at one point when he was still hearty and fluffy, but now he's all mangy and has bald spots and is down to a tiny 4.5lbs, not really the way i want to remember him.  soooo, while doing my research, i stumbled across this fantastic article! 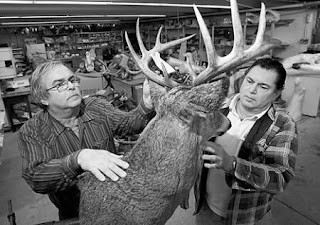 brothers!  jean & albert corola!  the only taxidermy shop on the island!  taxidermie safari, i loved their story.  you guys, you had me at bleaching skulls and secret formula.  pepito has an incredible face, i've always been fascinated by his super flat visage and weird skull.  so i called them to get more information (i felt really bad pepi was in the room when i called, so i turned around and tried not to make eye contact with him.  awkward!)  they were straight forward, friendly and helpful!  i have to drop off pepito myself (after he's dead of course), frozen is ok, after all, they're going on holiday for two weeks.  it was kind of nice to talk to someone who wasn't weirded out or grossed out by the whole thing and it wasn't awkward at all even when i told them the cat was actually still alive and i wasn't sure when i was coming by, no judgements it was all perfectly normal and natural for them  (and me!) and it was kind of the perfect thing i needed to hear.  the last thing i want to hear right now is a fake compassionate pet funeral director telling me about the rainbow bridge my "fur baby" is going to take dumb cat heaven.  there is no dignity in that.  cough, i mean that's just not right for me.  puke.  anyway.

the brothers use bugs to clean the bones, and then a special proprietary bleaching formula that keeps the bones from yellowing over time.  this sounds like what might happen in the wild!  i know i want pepito's skull for sure, and i thought about maybe 24K gold leafing it, i'm not sure about the rest of his bones.  they asked if i wanted the skeleton put back together, dunno, i may take the his cleaned bones and keep them in an antique apothecary jar or something, or bury them in the backyard.  i asked what they do with "everything else" and they dispose of it at the same place vets do, so it wouldn't be much different if i just left him with the vet.  i got a ballpark time & cost estimate, and their costs are very very reasonable, and it'll takes about six months because they're really busy.  when i die, if my bff bleaches my skull and maybe even gold leafs it, and puts it in a bell jar on their mantle, i'd consider that a lovely tribute.  hopefully you do too pepito!  you're the best cat ever!!!  xx 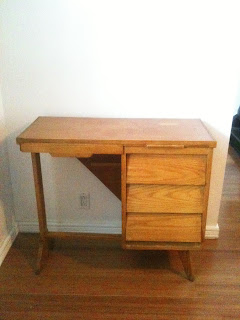 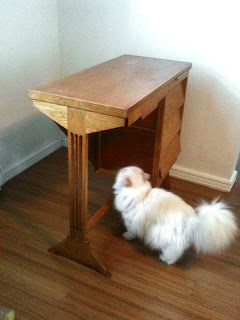 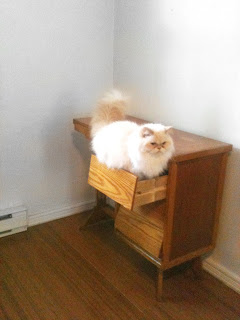 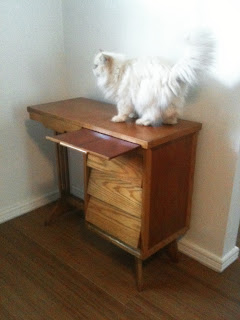 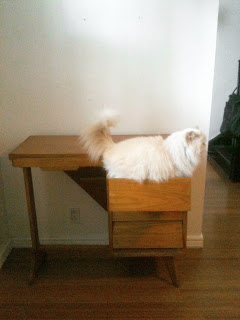 hey for once i'm not the one buying on craigslist.  well not for the moment.  but what's up with the super flakey people on craigslist?  if i see something i want, i get in touch with the person, arrange a pick up time and then buy the item as soon as possible.  not rocket science right?  i've listed a few things this week because i need to get rid of some furniture, um, to make room for all of my chairs.

anyway, i've been forced to add a kind of snarky note to all my listings that kind of goes like this: if you're reading this ad, the item is still available, this ad will be removed once the item is sold.

you wouldn't think this is necessary, but you would not believe how many emails i get asking: is the item still available?  i follow up with info potential meeting times to come see the item & potentially buy it & general location.  and then, there's no reply.  crickets.  it's like people are suddenly not interested in the item once they know it's still available.  and now even with the added "it's available" note, people are still asking me if the item is available.

and how about the people who contact you in a panic, say they want the item so bad, please hold it for them, and then flake out on the arranged meeting time?  just this afternoon someone asked if they would be able to carry this desk on the subway.  i don't know, can you?  you could have weak useless t-rex arms, i don't know you!  maybe you can lift a car.  buy my desk before i turn it into a triple bunk bed for the cats!

bought the cats an extra litter box.  three cats and one litter box, they were pretty much pooping on top of each other.  i put poof inside the new litter box but she couldn't figure out how to get out & sat inside crying.  i didn't think that they might not be able to figure the clear swinging door.  ***spoiler alert*** so i took the swinging door off, and still haven't put it back on.  sigh. 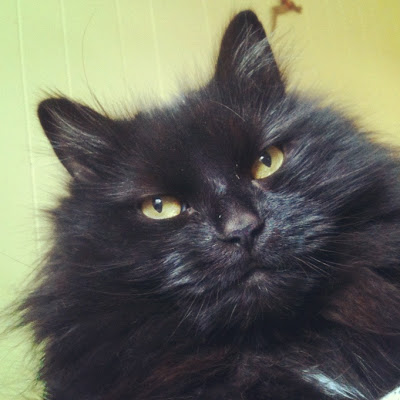 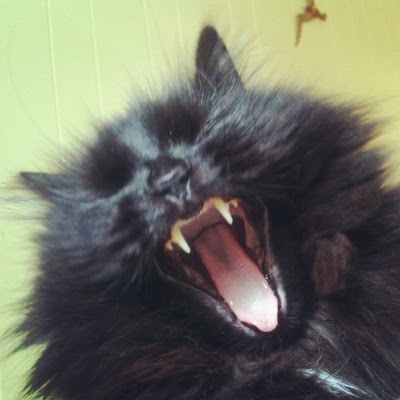 i've been cat-sitting beef.  he's super sweet.  he sleeps in the bed, loves getting brushed and squeaks instead of meowing.  he's a big hefty cat, so you can hug him pretty hard and he just keeps purring. 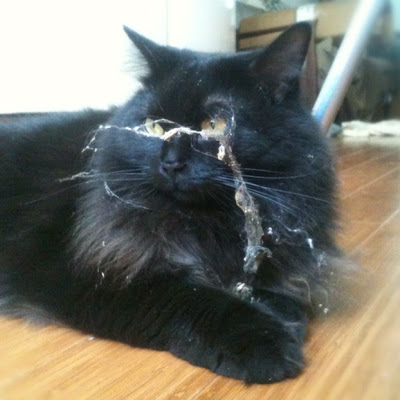 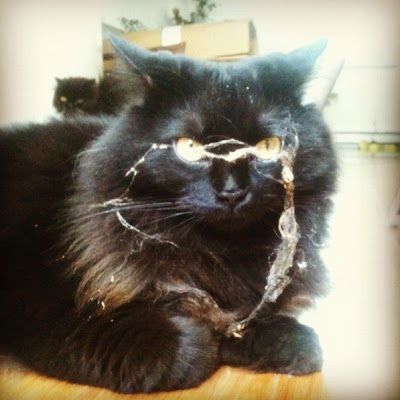 this afternoon, i came downstairs to find my cat with a rather larger pair of fashion spiderweb glasses. she was pretending that nothing was wrong and she that she didn't just come back from sneaking into my unfinished crawl space basement.   trying to play it cool with possible the biggest spider web ever on her face.  ponyo loves to play with bugs and then eat them, so i'm sure she had a pretty good meal in the basement.  i don't let the cats down there because ever since the last big renovation, i really haven't cleaned up the basement.  i'm kind of cleaning up after renovations burned out.  there's sawdust, bits of wood, metal & who knows what else all over the floor, not so good for cats.