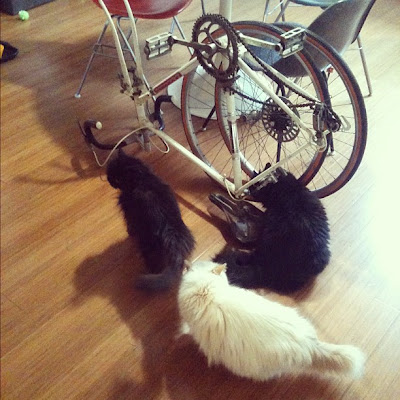 guess what i got today!  a new bike!  well it's at least thirty years old, but it's new to me.  i found it at the back of a thrift store for $25!  it's really light, only 20lbs, 10lbs lighter than my current 70-80's canadian tire supercycle road bike.  there's nothing super about that.  i mean i do still love my current bike, it's served me really well for the past few years, i got it for about $70 at sos velo in hochelaga.  they're  a not for profit that rehabs old bikes & they also sell "as is" bikes, they do good work!!  if you need a bike in montreal, i would highly recommend them!!  i end up putting in about $70 of repairs into that bike each year.  i got three or four punctured tires last year (there's a whole lot of broken glass on the road) & my bottom bracket seized up.

anyway, i'm excited to try out my new bike, it even has it's original leather seat!  (i hate using the word saddle unless i'm referring to riding a horse.)  my new favorit bike a little gem made in czechoslovakia.  also good, all the branding is stickers so i can take them off!  i happened to find this bike while thrifting off the island of montreal and i thought i could be sneaky and take the bike apart and take it on the bus, but they driver said no.  i was also carrying a HUGE suitcase of stuff with me so thank goodness i knew someone who working nearby (one of my contractors) & i was able to bum a ride into the city.  otherwise it would've been a long 5 hour walk home. 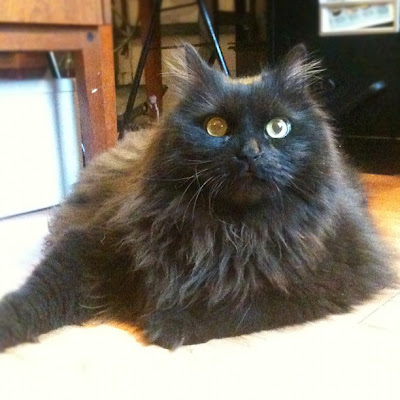 also in breaking news, this is beef!  he's staying with me for the next couple of months.  he's really cute.  right now he's living in my studio.  he's pretty shy, he stayed hidden for nearly two days,  so i'm going to wait before introducing him to my three cats so they don't give him a heart attack or panic attack.  he's really quiet & doesn't need to be entertained so i forget he's here until i hear him snoring on my pile of vintage boots.  yay for cats!!! 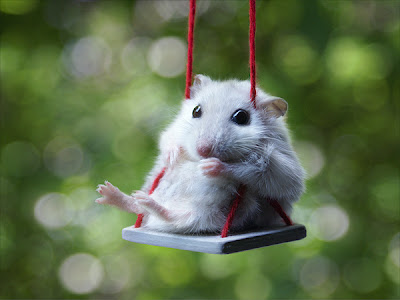 HAMSTERS!!! my house smells like hamsters right now.  and not in a good way.  i switched to cedar cat litter yesterday, the sweet smell of cedar chips?  no.  hamsters.  i've been trying to quit clay litter because it's kind of bad for the environment, it's mined and when you're done using it, it just sits in a landfill, uh forever.  a while back i switched to corn cat litter.  it was a disaster.  my ENTIRE house was covered in little bits of corn husk or whatever they use.  the tiny pieces are really really lightweight and they get everywhere.  the house turned into a corn litter snow globe.  the cedar seemed to be a bit heavier, it still tracks more than clay litter, but not nearly as bad as the corn litter, but the smell, THE SMELL!!!  i have two huge bags of it to finish, then i guess i'll try the newspaper litter.  that stuff clumps right?  oh cats.  i just can't quit you. 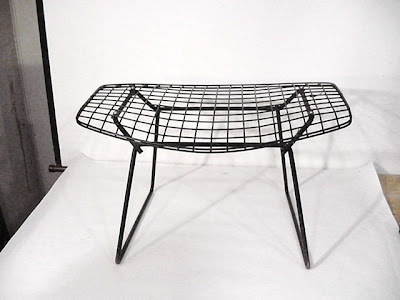 i just bought myself a vintage bertoia ottoman!  i wasn't at all planning on buying one, but i came across a listing for one today at a great price.  i don't drink, i don't really eat out, i don't buy clothing very often, especially disposable trend items, but i do like to indulge in used and slightly rusty furniture, and it's nice to know that i can always re-sell it for the same or more than what i buy it for,    unlike a stained trendy t-shirt, or an empty glass of beer.  i guess you could say i'm using the money i would be spending in one month if i went out (at all) let's say once a week and drank a lot of beer at a bar or bought party drugs.  so this ottoman a good investment.  i can either be doing drugs, or buying furniture.  so the choice is obvious and rehab is expensive.  i can justify any purchase really.  how about the time i owned a car for ONE day?  that still stings a bit.  anyway, i can't wait to pair up this ottoman with my $25 leather poang chair i thrifted from a nearby church before it burnt down.  now i have to hunt down or d.i.y. some decent glides for this little guy so he doesn't scrape the crap out of my floors.  i was thinking of maybe hand stitching some chunky leather tubes with sinew, seems like a better looking option than shelling out $20 for some nasty clear plastic ones with felt.  welcome to the family little ottoman.  i can't wait to get you in the mail. 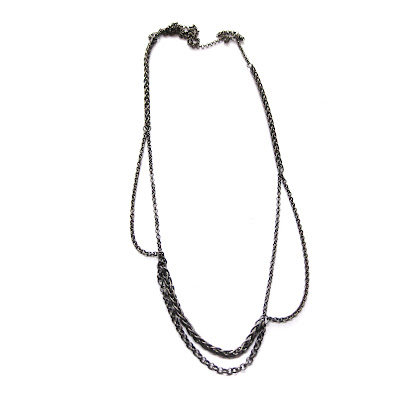 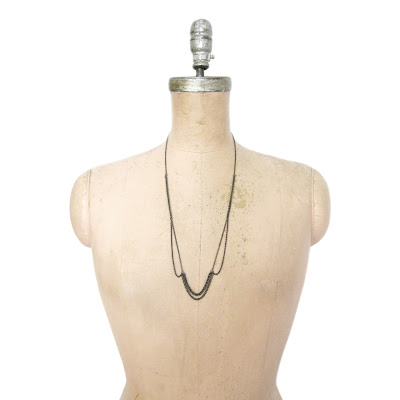 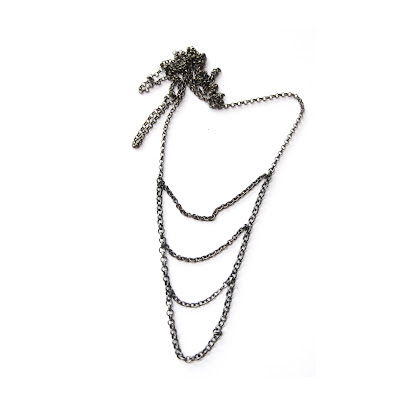 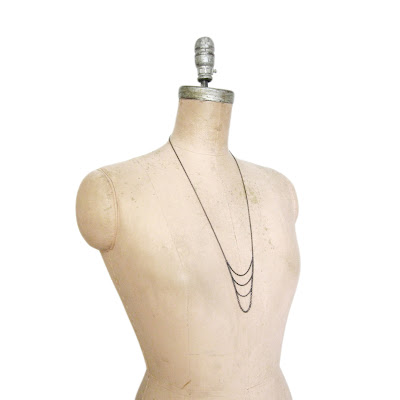 sometimes i just want to wear a minimal chain necklace, um when i'm not wearing two of my mineral friend necklaces at once.  these are made from 3 & 4 different kinds of silver chain oxidized to a deep black & long enough to slip over your head.  i named the one on top "chain necklace".  good name right?  descriptive, yet vague.  the one on the bottom is "ladder necklace". 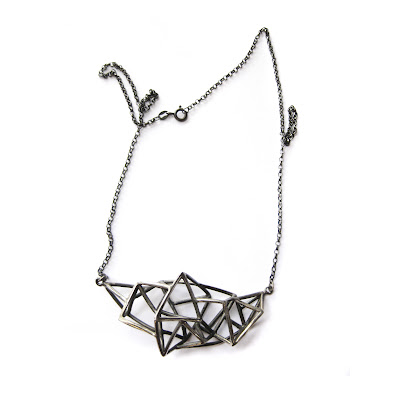 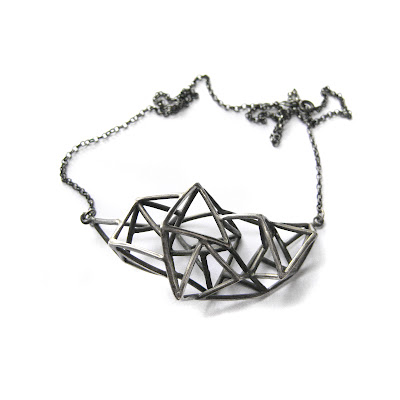 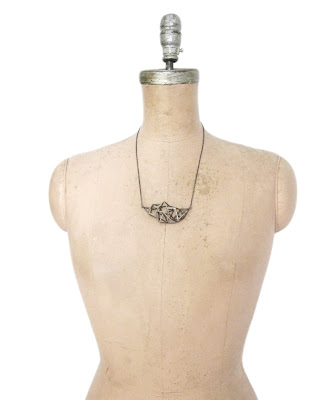 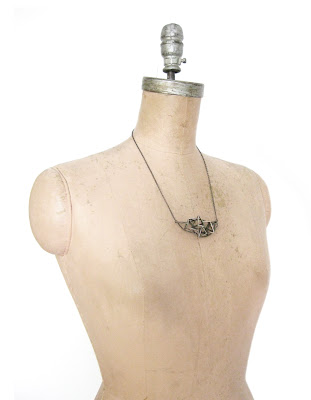 made a big necklace version of my bad polyhedron pendant.  this one is 3" across and 1.5" tall.  cast in sterling silver, oxidized to a deep matte black, and then i hand polished some parts to bring back a bit of silvery shine.  i'm usually incapable of making big jewelry, i like tiny things, statement jewelry is really not my thing, but i don't think this necklace will overpower your shirt/dress/outift.  it'll just make you way cooler.  hah. 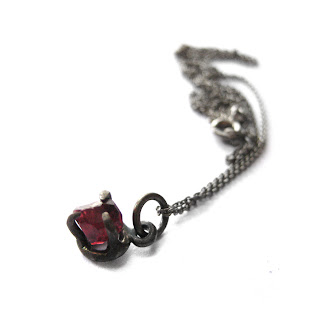 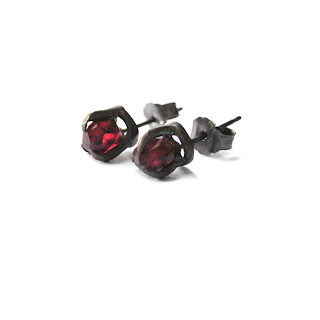 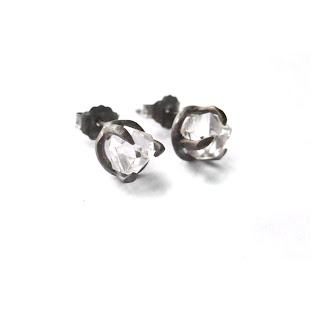 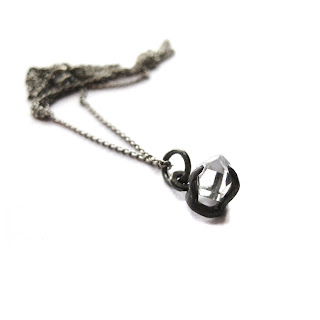 made these a few months ago, but sold all of them before i had a chance to take proper photos.  rough faceted round garnets earrings & pendant in handmade oxidized silver claw settings & big crystal bullet studs & pendant.  they're all about 1/4" across.  i don't really like coloured stones but i fell in love with these deep red garnets.  i really really like irregularly shaped naturally faceted stones.  my birthstone is ruby (blech) and i always wanted to switch to my childhood dog frisky's birth month april, hello diamonds!!!  yes, i had a dog named frisky.  i did not name him.  been watching sherlock, and i kind of want to name my next cat detective inspector, or maybe i'll just rename poof.  she's not going to care, she's a cat. 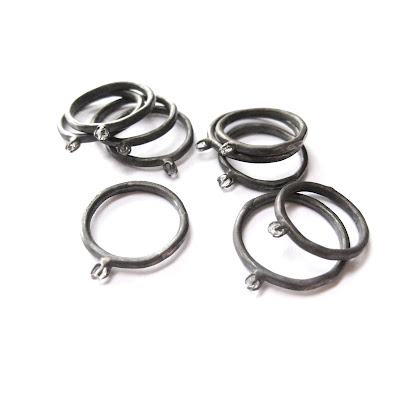 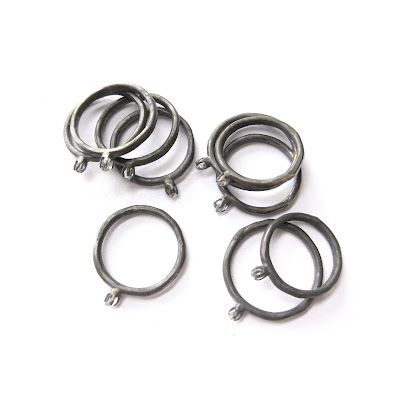 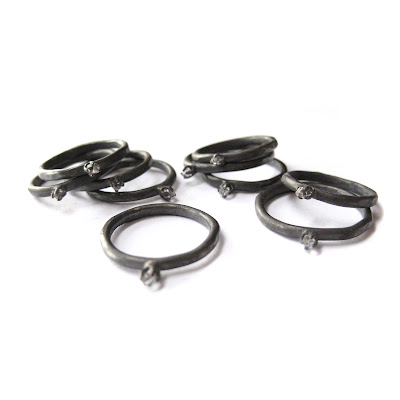 i only made a limited quantity of these crystal bullet rings for christmas sales & shows to try them out, but i think i'm going to produce them now.  i had problems making them in the beginning, but i finally figured out a good & consistent way to make them.  this batch is heading to victoire.  textured oxidized silver bands with a tiny vertically set herkimer diamond.  good for fistfights.  i was on a ring making roll today until i accidentally punctured my butane canister.  good thing it was warm enough to have my window open today, so when i couldn't stop the spray of butane gas by plugging the hole with my finger (what was i thinking???) i just threw the can out the window.  how's that for problem solving skills?  kind of like the time i threw out an entire fish tank/filter/motor/water/plants/rocks because i couldn't deal with my dead fish (singular).