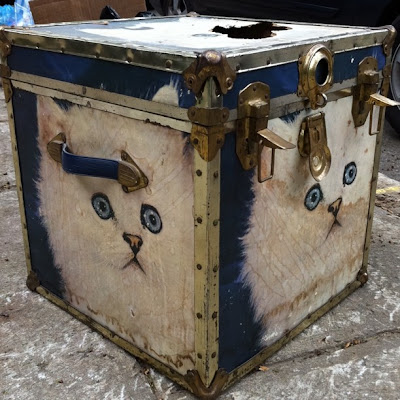 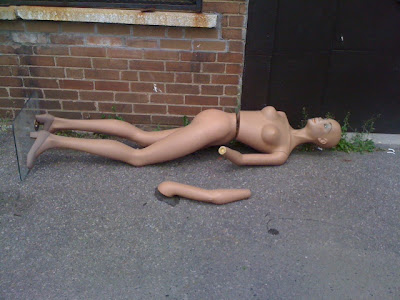 you know, when you have good people looking out for you, you can garbage pick and dumpster dive without even leaving the comfort of your own home.  the above photo is of an AMAZING cat chest my friend karl found discarded on the street, and thought of rescuing for me.  normally, i'd take it in a second, but it looks someone punched through the top kitten face and then used it as a toilet.  soooo tempting to have it in my home, but i just don't have the room or the hazmat gear to take care of it.
the photo below was just sent to me by brenden, this busted lady was discarded by the costume/uniform manufacturer down the street from us.  i don't really have the use for a mannequin like that, but it's tempting not to take it, even if it's just to put in in my backyard.  but how ugly are her shoes?
i've been taking bags of stuff to the salvation army and goodwill nearly every week in an effort to pare down my possessions to only the essentials.  the essentials include over 20 chairs for 2 people, hardcover art/design books, the shopping cart in my basement (you never know when you need one of those) a ton of vintage lamps, 16 pairs of boots and sneakers, anything that rhymes with herman miller and about a dozen vintage televisions.  pretty much everything else that isn't nailed down or being used is going to be given away or sold.  i'm pretty sure the tv's are the next to go.  i had my last kitchen custom built with a 12" space above the cabinets for my tv collection.  now the tv's don't have their own space so they're pretty much stuffed in various places collecting dust.
it's hard to keep uncluttered with a home studio for jewelry making/sewing and dealing vintage, stuff from the studio just starts spreading throughout the house and it's nearly impossible to contain it in one room.  first world problems huh? custom built kitchens and having too much stuff... wow i sound like a spoiled brat.  i guess i should go donate something to charity now or you know, work.