in the middle of filing some bad polyhedrons. 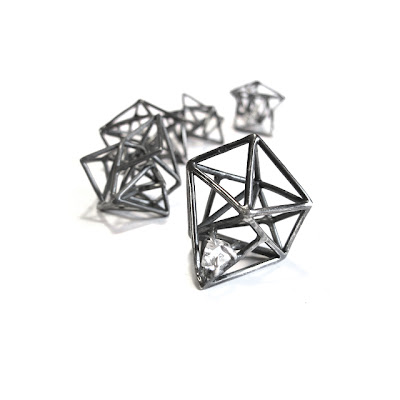 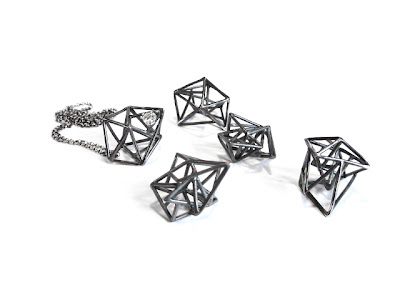 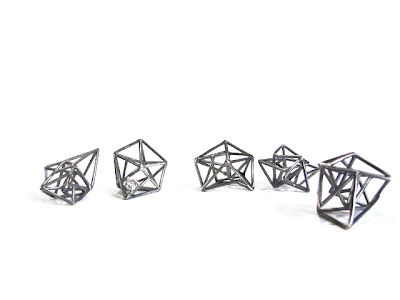 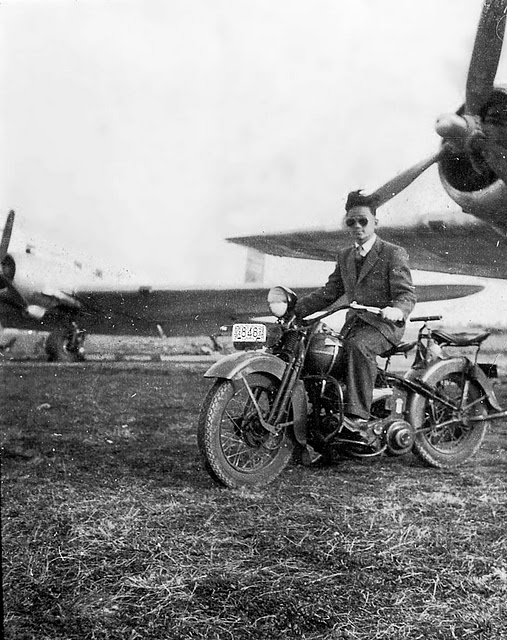 my grandfather on a harley.  (via my uncle ray's blog chang family pictures)

Email ThisBlogThis!Share to TwitterShare to FacebookShare to Pinterest
posted by elaine ho
2 comments:

ok, so if one could get a degree in procrastinating, i would have a doctorate, as well as several honorary degrees.  i'm currently working on an order that needs to go out tomorrow, so what better time to buy experiment with new iphone apps and make stop motion animation?  i don't need to procrastinate before getting to work, i can actually procrastinate while in the middle of working.  it's a gift.  i had my phone balanced in a crystal dish of straight pins and stacked on top of a wooden shadow box behind the sewing machine. shaky shaky.  i can't wait to make more of these!  the camera was taking pictures every 2 seconds.  oh, and i pre-cut all the pieces of leather so it wouldn't be like a 10 minute video.  back to work i guess.

one more thing.  as you may have noticed, i am animated gif obsessed.  so here's an animated gif of me sewing an "i love bacon" wallet.  i do love bacon, but as i sew each "i love bacon" wallet, i love bacon even less.  they're a lot of work to make, so i only make them for one special store.  propaganda in toronto.  oh right!  i lied, there's another thing!  if you're anywhere near toronto this week, stop by propaganda!  they're having a charity fundraising event called "go japan!"... a lot of local artist made some great art for the show.  here's the facebook event. 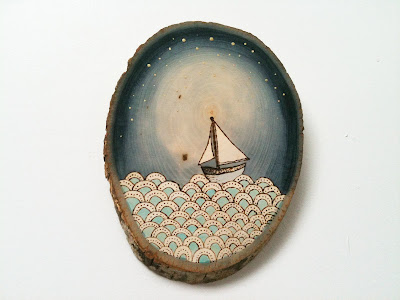 this is my piece, wood burning & paint on a slice of tree.  it also comes with a tiny anchor necklace.  see below.  but you only get one.  tiny.  anchor. 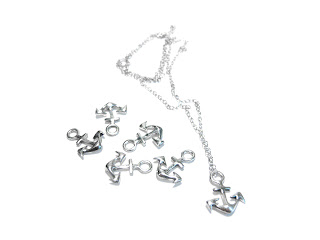 here are some photos of the submissions i stole off of the facebook page.  i want to go!  the only photos i didn't steal were the ones with an actual copyright watermark on the photo.  whatev.  anyway, check out the show, buy some art, it's for charity.  ok, back to work for real now. 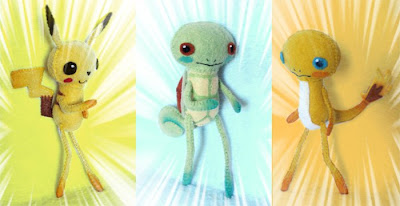 these are by margot jenner 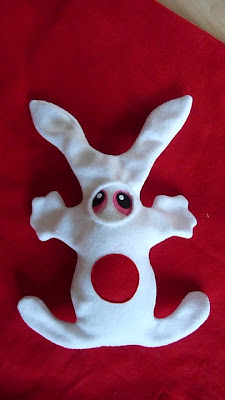 a stuffed maggot in a bunny suit by shane geil 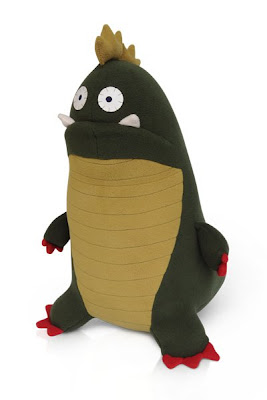 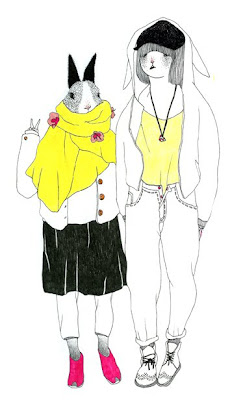 i've decided to stop writing blogposts and post animated gifs of my cats instead.  just kidding.  ok, not really.  that's got to be some sort of circle of hell for a cat hater.  but that's just crazy talk because nobody hates cats. 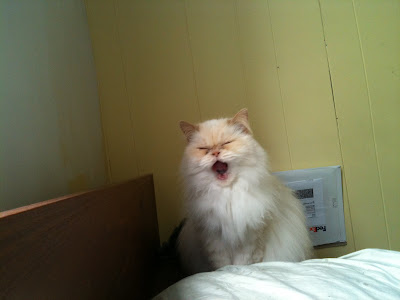 it's pretty hard to get out of bed in the morning when you're surrounded by super cute cats.  they're constantly luring me back to bed throughout the day.  i'm a big napper.  then when i actually get to work, poof does everything she can to try to be in the way. 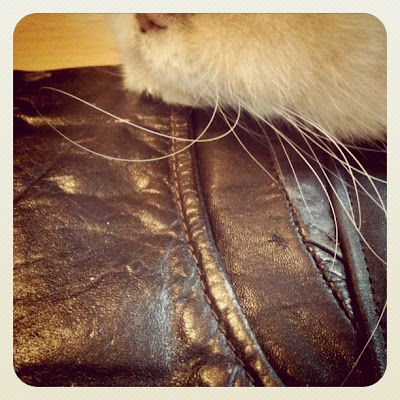 i'm trying to piece together a leather bag, and she insists on laying right on top of exactly what i'm working on.  i hope my customers don't have severe cat allergies because there's cat hair on absolutely everything.  sorry.

Email ThisBlogThis!Share to TwitterShare to FacebookShare to Pinterest
posted by elaine ho
No comments: 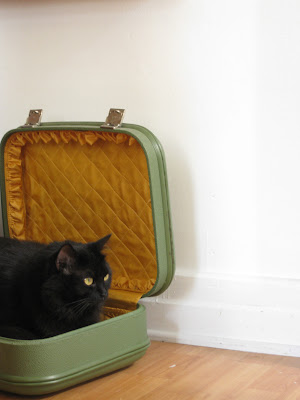 this is usually poof's cat coffin bed.  guess ponyo wanted to try it out.  been spring cleaning today and well, pretty much every day.  i have sooo much crap!!!  ok, it's vintage crap, which isn't really crap at all, but treasures.   MY PRECIOUS TREASURES.  it doesn't help that i'm addicted to shows like american pickers, antiques roadshow and storage wars.  oh, and i've started dealing vintage too.  i've been listing non-essential furniture on craigslist.  i just sold my hoop chair and antique brass coat rack.  i loved both pieces, but they've crossed the rainbow bridge.  yes, it's the same rainbow bridge cats cross when they die. 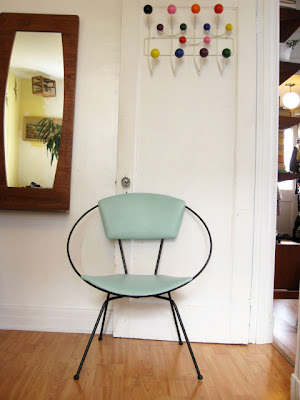 i'll miss you hoop chair, but i won't miss tripping over you every morning, because you were blocking the doorway.  oh right, and another thing, now i can confidently say that buying vintage and antique furniture is a great investment, because they don't lose value like ikea furniture and ugly furniture from the brick and leon's.  in fact, they make you money, and it's recycling.  i can justify any purchase.  this is also part of the problem.  now i don't know if i want to go antiquing or list more stuff on-line. 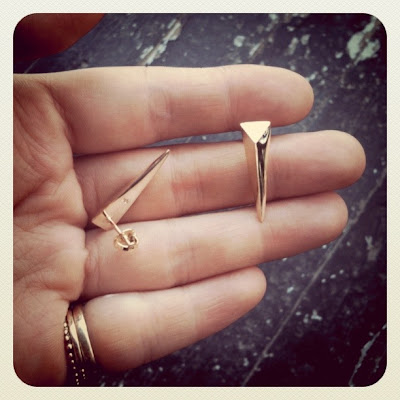 made a pair of custom triangle studs.  these are cast in solid 14K yellow gold.  they were so shiny, bright and had such a great weight to them... i really wanted to keep them for myself.  actually, come to think of it, i would be losing money if i didn't make a pair for myself, especially with the price of gold always going up.  they have screw on butterfly backs so you won't lose them!  i think i would cry solidly for two weeks if i ever lost a chunky solid gold earring.  and then i would spend week three trying to find other people to blame for the lost earring.  that's how i roll. 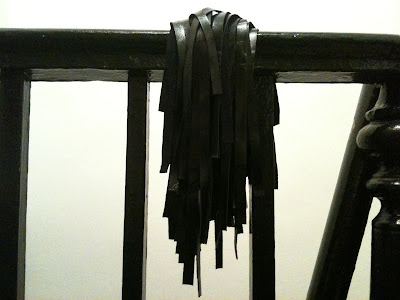 a pile of leather zipper pulls...

Email ThisBlogThis!Share to TwitterShare to FacebookShare to Pinterest
posted by elaine ho labels leather
No comments: 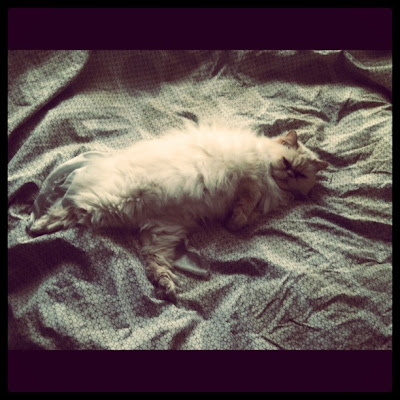 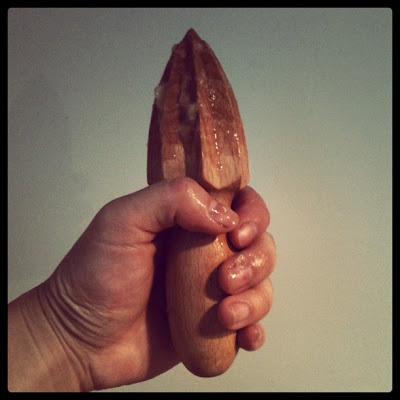 yeah, this looks kind of disgusting.  but it's just a citrus juicer.  i had a gift card for bed bath and beyond, so i got myself some kitchen toys.  i made lemon bars with a toasted coconut crust this weekend, with processed white sugar and not-free range or organic eggs.  i usually replace eggs with chia when i bake, but i didn't feel like messing with the recipe too much, since i was quadrupling it, and besides, not everything has to be healthy.  if you use this recipe, double filling, add vanilla, and use parchment paper instead of foil.  btw, this little juicer is one the best inventions ever, you can get every last drop of juice out of a lemon. 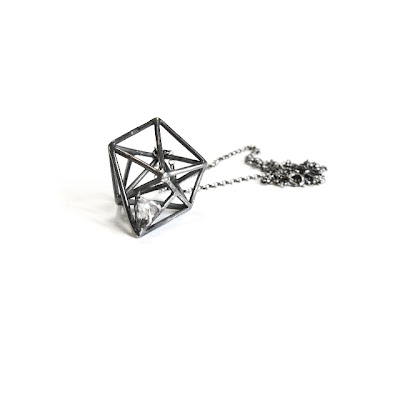 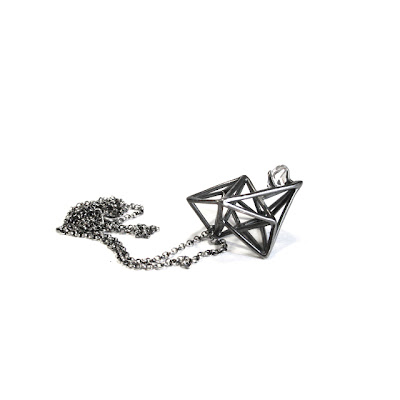 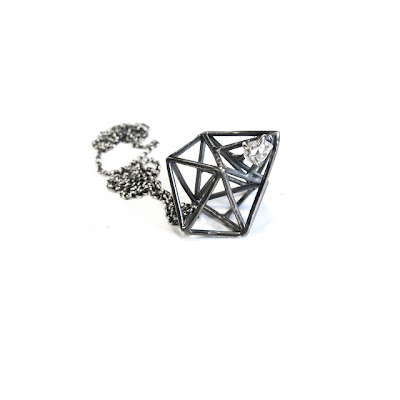 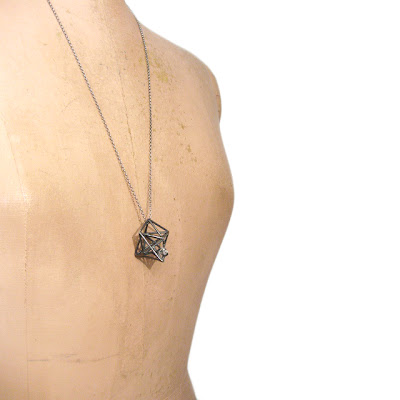 here's a daintier version of my bad polyhedron pendant, made with thinner wires, and now with diamonds!  ok, it's herkimer diamond aka double terminated quartz.  i'm calling this one a stoned bad polyhedron.  i really like herkimer diamonds because they're super sparkly, have irregular facets and are full of natural inclusions.  and hey, most of them are mined from upstate new york, so you're not funding a war or something, and they also don't cost a million dollars.  happy mother's day.  buy your mom one of my necklaces.  you would if you really loved her.