got me some cat art 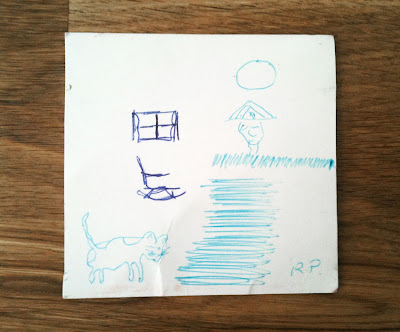 oh just a little piece of custom made art.  i was at a church sale yesterday, and while i was waiting for the man to go in the back room to get my change, his middle aged special helper asked if i wanted him to draw a picture for me.  i politely declined because i didn't want to trouble him, and from the looks of the rocking chair & window already on his scrap of paper, i was a little bit worried and i wasn't sure what i'd be in for.  also, this guy smelled so strongly of cigarettes, i think i got a nicotine buzz and i was also kind of edgy because there was this other customer in a wheelchair in the middle of the room that just sat there and stared at me through the rack.  he would pivot his wheelchair to keep an eye on me as i moved around the room.
even though i said no, he started drawing anyway.  he drew a circle and said "soleil chinois" which translates to "chinese sun".  was he thinking of the land of the rising sun maybe?  i'm not sure, but good on him to peg me as chinese because most people guess japanese or korean first.  then he draws a triangle and says "chapeau chinois" chinese hat.  ok fine.  who doesn't love a coolie hat right?  he studies my face, and then adds a head to the hat and all i can say is thank god he didn't draw me with slanty eyes and buck teeth.
i'm kind of obsessed with getting people to draw me cats, so i asked if he could draw me a cat and he drew the most awesome calico cat ever.  he took the time to explain the cat moustache while he was drawing it.  then he added the "RP" on the bottom, i asked him if that was his name.  and he said no.  anyway, he was super nice, and gave me the drawing.  i didn't realize until after i left, that it was done on the back of a pack of cigarettes.  it's proudly displayed on my fridge right now, along with a thank you note from japan that's addressed to "elaine-san".