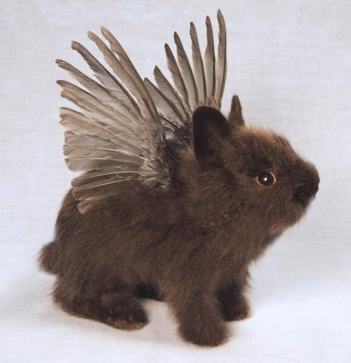 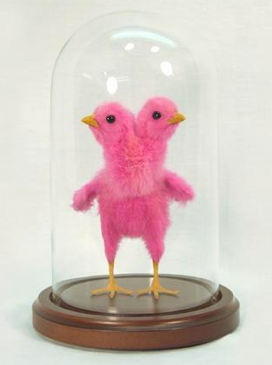 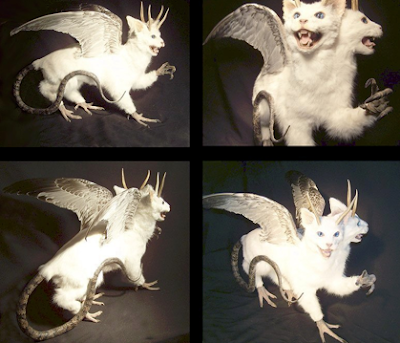 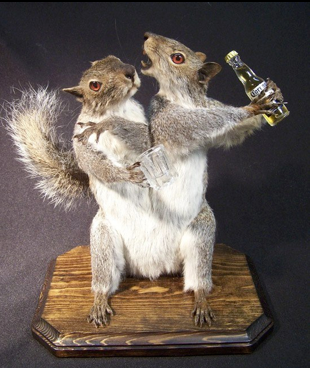 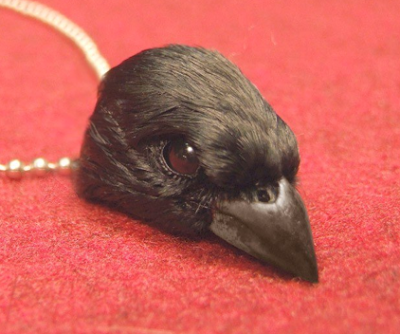 ok. amazing... whatever you can dream up, custom creature taxidermy can probably make. i've always wanted some taxidermy creatures in my home. growing up, we had a giant stuffed pheasant in flight in our dining room. but i don't want some boring pedestrian animal. i want two heads. bright colours, things with wings that shouldn't have wings. this is the shop of my dreams! if you're ever wondering what to get me for christmas.... cough. cough...
here's the custom creature taxidermy bio, cut&pasted directly from the website! (she's so cool.)
"Artist and naturalist Sarina Brewer recycles the natural into the unnatural, breathing new life into the animals she resurrects. While earning her BFA in 1992 from the Minneapolis College of Art and Design, she worked predominantly with oil paint and found objects, most of which were animal remains. Preparing animal remains for use in her sculpture and abstract paintings slowly evolved into taxidermy over the course of a decade. Brewer is now a licensed taxidermist as well as a prolific artist. She volunteers her skills in the biology department of the Science Museum of Minnesota and is also engaged in various natural history related projects for other educational institutions and museums. She is a strong proponent of wildlife conservation who also participates in wildlife rescue and rehabilitation.
None of the animals used in Brewer’s work were killed for the purpose of using them in her art. All animal components are recycled. She utilizes salvaged roadkill and discarded livestock, as well as the many animal materials that are donated to her. Donated animals are often casualties of the pet trade, destroyed nuisance animals and pests, or animals that died of natural causes. A very strict "waste not, want not" policy is adhered to in her studio - virtually every part of the animal is recycled in some manner.
Brewer is a self-proclaimed science nerd who incorporates her past formal art education with her passion for biology and the bizarre. Her childhood preoccupation with cryptozoology and anomalies of nature manifest themselves in her outlandish reveries of fur and flesh and every peculiar artifact she creates. These influences, combined with a slightly dark sense of humor, have carved out an unusual niche for Brewer in the art world. She specializes in creating fictional composite animals and sideshow gaffs for discerning collectors and the many connoisseurs of the curious around the world. We now invite you to peruse the culmination of nearly three decades of the study of art and the natural sciences in her eccentric works."
check out her website... specimens including fetal beavers, mummified cats, skulls, CUSTOM order!!! pepito my sweet cat, your coffin might be a fedex box headed straight to custom creature taxidermy. 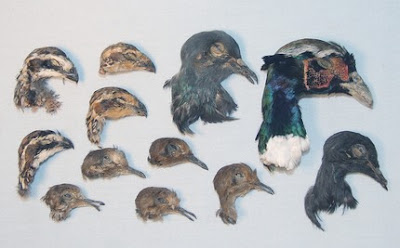 she also make really incredible wearable jewelry, available on etsy. like that amazing bird head. there's also another one with pearl eyes, with a big pearl in it's beak. nothing is wasted with custom creature taxidermy. she have an "odds and ends" etsy shop where she sell, you know, the extra parts that they don't need. like a bulk listing of bird heads, or a big bag of bird feet and squirrel feet. sweet. or a jar of skinned squirrel heads. no big deal. (via accidental mysteries)