merry christmas to me 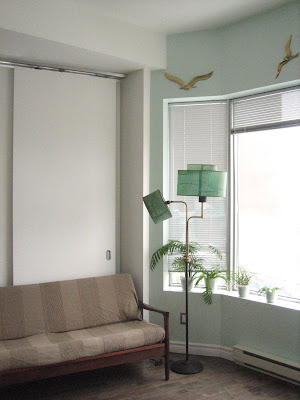 picture of the fold out couch in my old condo 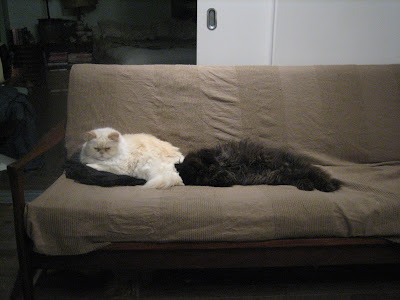 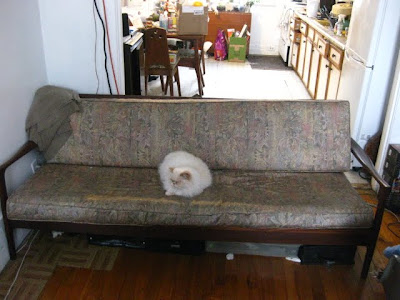 original fabric, new-old house, no we weren't robbed, just messy. and in the middle of renovations....
so every christmas i like to buy myself something real pretty. last year it was a vintage planter. this year? i'm getting the couch recovered. finally. i've had this mid century fold out couch for nearly three years. i've been putting off recovering it because there's always something else i'd rather spend my money on. you know, like food.
i managed to get my hands on two entire grey cowhides at an excellent price from sauriol when he closed down last year, (mid century furniture store on st.laurent) and i've been holding onto them since, and well, also using them as tablecloths during shows. two whole cows!! in a nice matte grey!!
the original cushions are so old that the foam is dried out and crunchy. i opened the zippers once, and dust came pouring out and the fabric is this disgusting slippery multicolor pattern disaster. i've been covering up the couch with a blanket ever since i brought it home.
i pass this re-upholsterer on the way to the metro all the time, and finally stopped in last week... i'm having the cushions done in four pieces instead of two giant ones and tufted with one giant leather covered button on each back pillow, and no cording. simple. can't wait to see it! i'm also going to ask the guy if i can intern for him one day a week. i would love to learn a new trade! and they're also a woodworking studio, not to mention located directly behind a kentucky fried chicken.