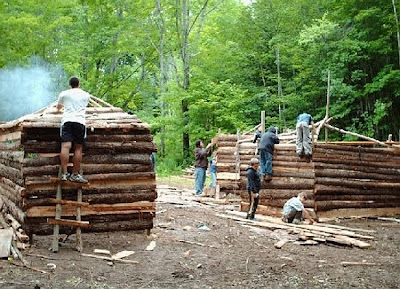 these nerds named their village made from found objects, cough trash, "hutopolis". 60 kids from ages 5-19 got together to build 8 huts, in two weeks. and guess what? no casualties.
i feel like i was such a good for nothin lazy brat. doing nothing but practicing my violin, and running math and spelling drills with my mother, during what was supposed to be my fun summer vacation. oh, and maybe if i was allowed to wander past the sidewalk in front of my house, i would have built a mini village of NINE huts in TEN days. take that royal academy of music summer camp!
but, now i can figure out what change to give the cashier real quick, so i can get a bills back instead of a giant pile of straight up coin. but i seem to be lacking in some basic athletic skills. if you throw something at me to catch, i'll slowly step out of the way, give you a confused look, that turns into a stink eye, and my hands won't move the entire time, it's unnatural. (via ecofriend)